Adam McLaughlin
Shop Manager & PADI IDC Staff Instructor
Adam is from York, Pennsylvania. He first tried diving in 2011 on a family vacation to the Florida Keys at age 16. Diving instantly became a special part of his life. His mother purchased an Open Water diving course for him as a graduation gift after high school. 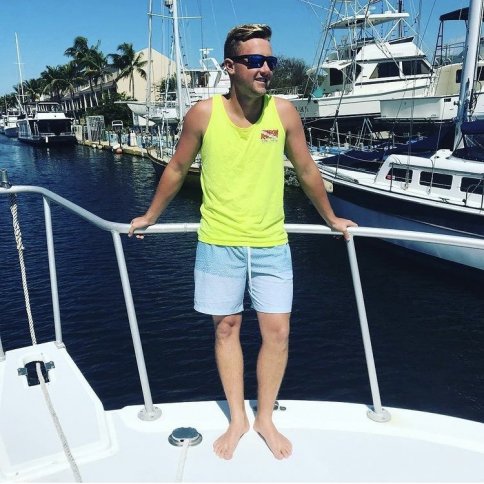 When Adam was 21, he decided to move to the Florida Keys to pursue his dream of becoming a Dive Instructor. Adam completed a 7 month long internship program, which covered everything from filling tanks and learning about equipment, to becoming a dive instructor. He went on to continue working as an Instructor and Divemaster in the Keys for 3 years.

Key Largo diving holds a special place in Adam’s heart, having logged almost every one of his first 1500 dives there. His favorite dive sites are Molasses Reef and USCG Duane.

In search of a new challenge, in 2019, Adam accepted an opportunity as a Divemaster and Crew member at Cayman Brac Beach Resort in the Cayman Islands. Life on a 12 mile long island was quite the adjustment, but he wouldn’t trade his time there for anything. The most significant difference in diving in the Cayman Islands is the overall health of the reef. Adam is fascinated by Pillar Coral and he was lucky enough to find this endangered coral quite frequently on Cayman Brac. His time in the Cayman Islands came to an abrupt end when the Cayman Government shut down the islands due to COVID-19 and he was forced to move back to the States for work.

However, some good did come from it, as he ended up in St. Petersburg where he met Brenda and Captain Joe. Adam aspires to have a well-rounded diving education. He is a PADI IDC Staff Instructor and a certified Freediver. His future goals are to acquire his captains license, learn to repair gear, and venture into technical diving. Besides diving, Adam enjoys following sports, camping, and hiking.
Pearce Daley – PADI Course Director
Underwater Photography Training 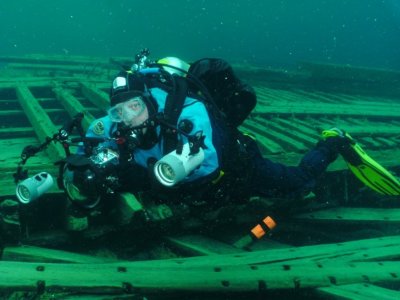 Picture world famous model Christie Brinkley and her husband, musician Billy Joel, swimming in the Oahu Hilton pool on December 22, 1987. At the side of the pool is a PADI Instructor offering the use of scuba equipment to see if I would like it. After 30 minutes of “testing” the gear and never looking at Christie, I was hooked. I had two more dives at Waikiki Beach before flying home to Toronto.

Returning to Toronto I immediately met Joe and signed up with Letts Dive. It was 1988. One year later I was an Instructor and three years after that I was a Course Director.

I have taught hundreds of students to all levels and organized group travels throughout the Caribbean. Since that time, I have travelled to all 24 time zones and dove some of the most spectacular sites in the world.  At one point my wife, an IDC Staff Instructor, and I ran a dive and sail charter in the Bahamas, and we have our 100ton Bahamian Ships Masters license.

As an International Company Sales Manager and CEO, I have combined my work travel to take advantage of diving.  Today I run my own business consulting firm while teaching new photographers the ins and outs of U/W Photography.  Many of my photos can be seen at www.h2ofotos.com. 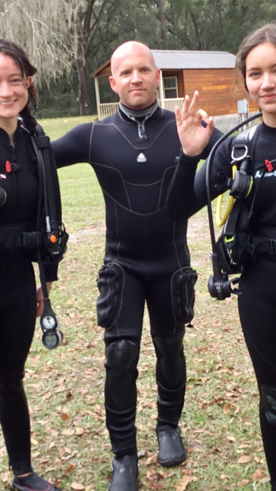 Charlie is our resident sidemount guru. He started diving in 2005, during his Army days, while stationed in Sinai, Egypt. The passion stuck with him and in 2010, he did his Advanced course in Airlie Beach, Australia. His mind never really came back to the surface and by the summer of 2010, he was living in Playa del Carmen, Mexico, on the path to getting his PADI instructor ratings. He worked for a while on Cozumel teaching and guiding certified divers until it was time to move on.

In the fall of 2011 he moved on to train as a Commercial Diver and learned how to dive in a Hard Hat while breathing on surface supplied air. Working in commercial diving was short lived as he returned to his primary skillset as an aircraft mechanic, returning to Afghanistan as a civilian to work as a maintenance lead on Afghan Airforce helicopters.

Being on that side of the world gave him the opportunity to continue his personal level of dive training and in 2013 he returned to Egypt, the place where it all began, to train in the technical side of diving.

He trained up to the Advanced Trimix level and discovered his favorite gear configuration in the water, sidemount! After his contract ended in Afghanistan, he returned to Playa Del Carmen to train as a cave diver. He is a certified equipment technician on a variety of manufacturers of dive gear.

Charlie now works locally during the week as an Aviation Maintenance Instructor.
Charlie will be our go to Instructor at Letts Dive!! when Capt. Joe is unavailable. Anyone that dives with Charlie loves his calm, focused style. We are lucky to have him on the staff of Letts Dive!! And if you haven’t tried sidemount…
Mark Sommer III
SSI Instructor Trainer 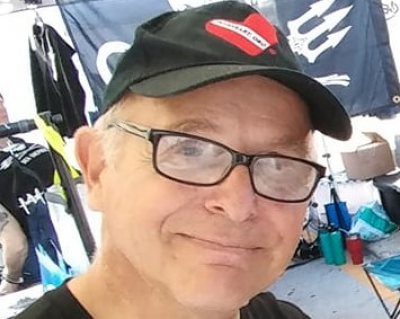 My Uncle introduced me to SCUBA diving when I was very young. That was the days of double hose regulators, no BC’s, no SPG’s and steel 72 cf cylinders. Finally got certified in 1968. You went from there on your own initiative.

Joined the US Navy in 1972. I passed the screening test for BUD/S. Completed BUD/S in December 1972. Joined Underwater Demolition Team 21 after BUD/S. We dove both double hose and single hose Open Circuit regulator kit, mixed gas rebreather kit, and Oxygen rebreather kit. Gear setup and maintenance was the operator’s responsibility. Had the opportunity to work with the Naval Experimental Diving Unit on rebreather research as a test diver. Learned much from the USN Master Diver and the Officer in Charge of the Naval Special Warfare section of NEDU.

In1976 I earned my Assistant Instructor credentials. Stayed at this level through the ’80s and ’90s. 2002 after a quarter of a century in finance I started earning my instructor credentials and technical diving qualifications. I am currently an Instructor Trainer with SSI and DAN. I am additionally an instructor with SDI and Diveheart.  The courses, I teach, include Open Water Diver, Full Face Mask Diver, Diver Propulsion Vehicle Diver, Cavern Diver, and XR Trimix Diver.

I like to know how my kit works. I have taken the manufacturers’ repair technician classes for more than a dozen brands. This includes some rebreathers. That experience back in the Navy has paid off. Gas Blender and Visual Inspection Procedures are courses I teach.

I enjoy cavern diving, with Eagle’s Nest being one of my favorite sites. But the best part of diving is all the amazing people I have met in the sport.
Note: To date, Mark has made over 6000 dives and will be working with us as a Tech, Cavern Diving Instructor, and Chief Repair Technician.  Mark is a walking encyclopedia on diving. We are privileged to have him joining us in this venture.
John Mowrey - SSI Open Water Instructor 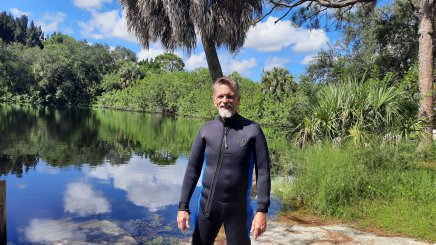 John grew up in West Texas in a small town called Memphis.  Growing up, one of his favorite shows was Sea Hunt.  He always wanted to try SCUBA Diving but did not get the chance until he moved to Redondo Beach, Ca in 1980. The local dive shop was giving free Try SCUBA experience.  Long story short, he was hooked and has been diving ever since. He has made over 6,000 dives.  He first got certified in 1980 with NASDS Open Water One.  Then went right into Los Angeles County Advanced Program where he earned his NAUI Dive Master Certification. In 1982 he became a YMCA and NAUI Instructor. In 1990 he was certified as a TDI Nitrox Instructor and then in 2002 a Public Safety Diving Instructor for PSDA.

From 1999 to 2002 he worked as a SCUBA Instructor or Safety Diver on various major motion picture and commercial projects.  Some of the films he worked on are: Castaway, Men of Honor, What Lies Beneath, AI (Artificial Intelligence), Baby Boy, Triple X and a music video for Incubus. He also worked on commercials for Health Network, Pepsi, Visa, Atlantic Bell, Flintstones, & Oxygen Sports Drink.

From 2002 to 2004 he trained and worked with the Los Angeles Port Police in their Search and Rescue team. He trained and supported the team on search and recovery of drugs, explosives, weapons and bodies.

As for recreational diving he has made dives up and down the California coast, Nevada, New Mexico, Texas, and Arizona. He has traveled and dove in Mexico, Philippines, Fiji, Australia and most of the Caribbean Islands.

In 2016 John and his wife of 47 years (Rebecca) moved from Los Angeles to Seminole, Florida to retire.

John loves to dive and looks for any reason to do so.  He enjoys teaching, especially new students.